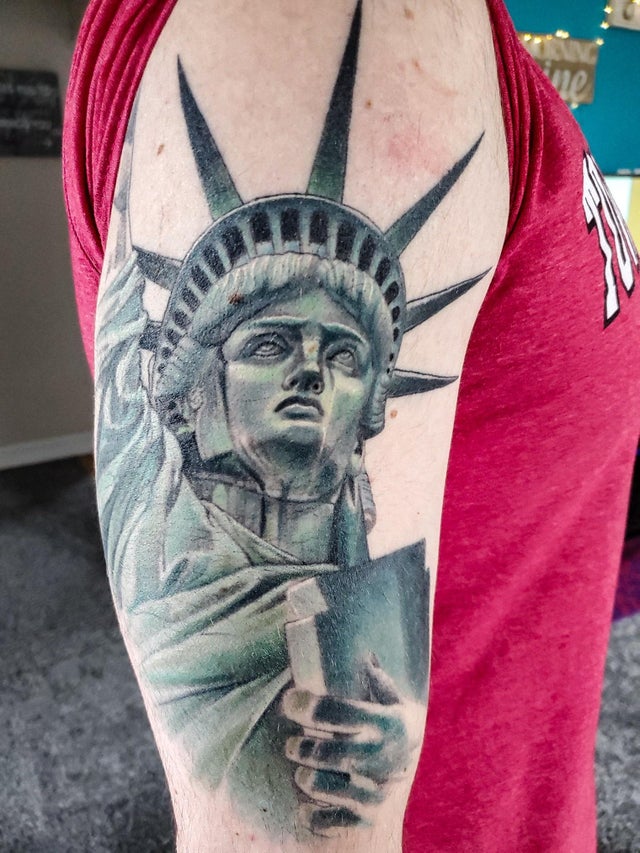 24. Quarantine tattoo.. My buddy and I got bored so he decided to make this tattoo to me.. boooooy!!!

23. First session of my Lovecraft half sleeve by Dusty Reier at Invictus in Greenville OH. The skull was made big enough to go around an existing tattoo my wife gave me.

22. King Rat by dezskull (IG) – Buenos Aires, Argentina. Finished in October last year and I’m absolutely in love with them.

21. 5 months healed – I got this done around my birthday which is November 22nd by a guy named Tito at Dream City Tattoos in Chicago.

17. My late father’s roses vs. mine day of vs. mine now, 4 months healed. Done by Freddy Ray at The Gypsy Vault. Fort Wayne, IN.

16. Healed cover up I had done by Taylor Mills at Provenia in Reading.

15. Hi I am going to get my first tat soon! And I really love this tattoo the scale and simplicity and how unique it is

13. 4 months healed skull and snek- made by Chris Suicide at Old Tradition Tattoo in Hollywood, CA

12. Statue of Liberty, done one month ago by JJ Claudio at Empire State studio, amityville, NY

11. My last tattoo before quarentine. (By my dear friend Andre at Anvil Tattoo in Rosemead CA) @acspengler

08. Healed, finished up in February 2020. My cats in flowers on my inner forearm, done by Rylee Coyote at Legacy Arts #2 in Dallas

06. A message left by my Dad in one of my birthday cards and done in his handwriting. He grew jade plants. Done in 2018 by Cailin at Grinstone Tattoo & Gallery in Waterdown.

03. my first tattoo! got it in january 2020 at apple tattoo in rochester, ny! (thank you matt lucci!) it’s the album cover art for “for emma, forever ago” by bon iver ) i had the best first experience and can’t wait for many more!