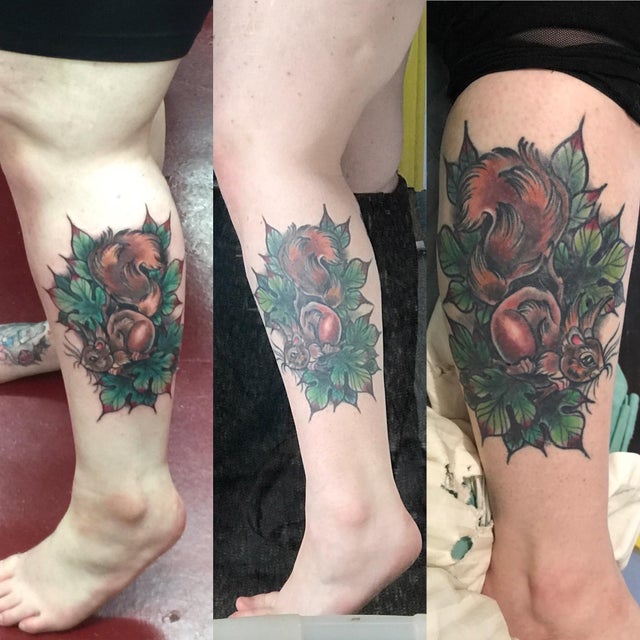 25.  A couple of quick Friday the 13th flashes done by Kinsey at Myth Tattoo (Eugene, OR).

24. My baby fishing hook from when it was freshly done 3 days ago. Done at Aarcon Reign in Prince Frederick MD by Carmen

18. Hyperrealistic black and grey roses and skull (also adding some bead work on the ribs) so far (just got home from the session). Cody Wright at Dreams in Ink tattoo.

16. One half-sleeve, 9 birds, each one with a story – Kevin Shepke, Shepke Studios, Maryland

14. Healed humpback whales done by Lacey at Grizzly Tattoo in Portland, OR from 2018

13. In memory of my Father, he had this design on his forearm from Korea when he was in navy. Rib piece, completed a year ago by Josh Dille, Portlands.finest, Portland, Oregon

08. My latest, seven months healed. “Le sommelier” by Dagmar @the liner in Roeselare,Belgium.

05. Healed Crow and Mushrooms from February. Done by Nox at Ghost ship tattoo in Liverpool, UK.

03. Early stages of a full sleeve planned with Dr Inkwell in Leeds. All work done in 2018, I was supposed to be going in for more this month (reposted as I didn’t make it clear it was healed)

01. I messed up first time posting so i will try again. This is the healed picture of the plague doctor, it was done in the end of January 2020