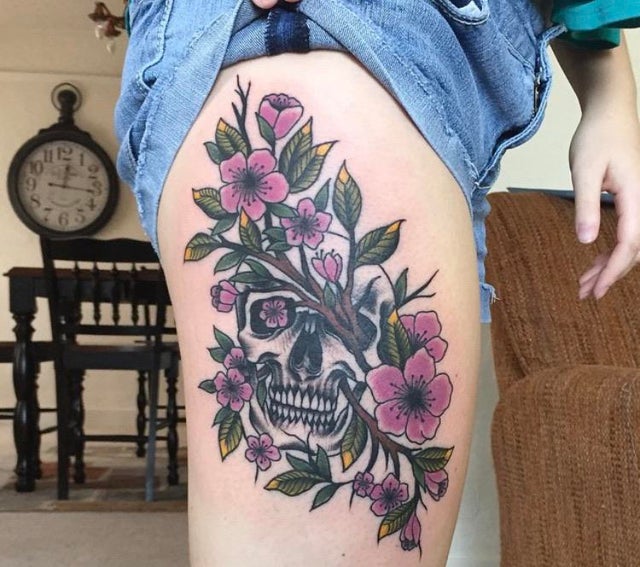 25. A piece done in honor of my grandparents, done by Casey James at Monarch Studios in Houma, Louisiana

23. Michelangelo Fingers Melting done by Wes at House of Stain in Columbus, OH.

21. A little late but here is my Friday the 13th tattoo (and my first ever!) Double-headed snake done by OC Thomas at The Ink Gallery Tattoo in Livermore, CA

20. Happy Ides of March! I got stabbed 23…thousand times by Cody at Undead Ink Studio in Spokane Valley, WA

18. Lil Peach on me by Chad Lenjer @ Black Metal Tattoo in Strongsville, OH

17. Tattoo by Shae Sullivan at Haunted Heart Tattoo in Tulsa

16. Just got this sick eye by Dahlia at Modern Heart Tattoo in Austin, TX

15. Lady Profile done by Rizzo at Classic 13 in Birmingham AL.

14. “Time heals all wounds,” scar cover up done by Connor at Iron Thorn in Trexlertown, PA.

12. I got my hand blasted by Willy Cutlip at Bad Apple Tattoo in Las Vegas, NV. Been wanting a hand piece for a while now!

08. Done by Nate Burns at American Crow in Columbus, Ohio

07. Finished up my nature lady yesterday. I’m so in love. Done by Jaeden Helgason at Black & Blue Tattoo in Nanaimo BC.

06. Hibiscus for her home of Okinawa, the cobra because it’s rad, done by Keith C (me) at TNT Tattoo Company in Haltom City, TX

02. Stargazing, by Beth Rose at Calamity Tattoo in Edinburgh, Scotland

01. Looking into the uncertainty which is my future. Susan Lindsey at Ink Drop Tattoo Shop in Bellingham WA