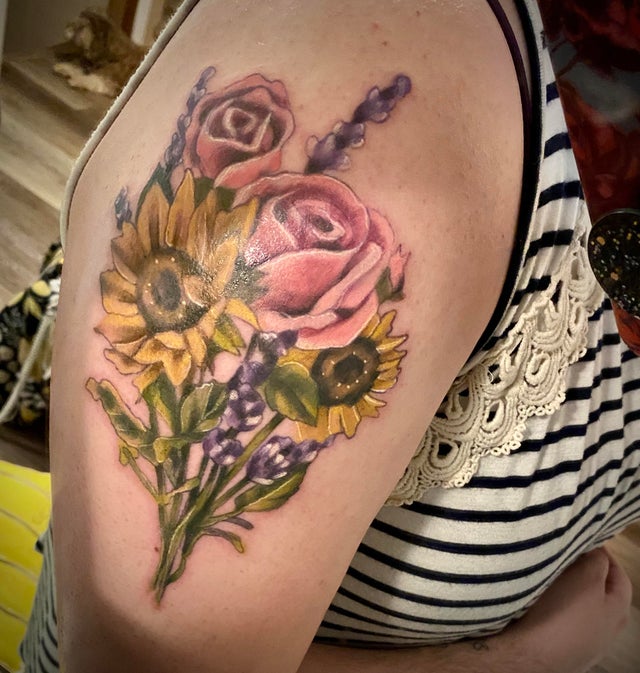 25. This was my first tattoo, it’s a bit stretched from the weight I put on when I was pregnant, but I still love it. Death tarot card

23. 9 Months healed, Fern tattoo by Loui Tuhaka at Natives Tattoos (NZ). Other side in comments.

20. Dead Space by Andrewksheltontx at Depiction Tattoo in Arlington Tx

19. Cover up back piece by my dude Jamus Franks @ Six Daggers in Boise. Can’t wait to finish with some color.

18. First tattoo I had done in 2015 a year after my dad died, my father combined his initials (T and F) into one letter he used for signatures. Done by Dre at Smokin’ Aces in Normal, Il.

15. What do you think First big piece via Tattoo Nouveau in Green Bay, WI – artist Teri

14. Done by john at red moon tattoo in chicago, il

13. Deadpool fresh VS healed (4 y o) by CJ Mackey at Mount Olympus in Ardmore OK. Posting this in case my “fresh” post gets taken down, didn’t see the memo till after I posted.

10. Hanya Mask and Snake done by Biggs at Tattoo Saga in Powell, Ohio

09. My adrenaline molecule, I got it around thanksgiving and I love how simple it is. Done by Patrick Madden at Euro Tattoo in Rockford, IL

05. The Queen of Hearts. Inspired by Charles Rennie Mackintosh, designed by Esie Cheng of Baltimore, and inked by Dei at Would Tattoo Studio in Buenos Aires. Enhancing three hearts that were already there.

03. Started my half sleeve! Inspired by the Swiss Alps. Done by Rich at Silkworm Tattoo in Hamilton, OH

02. Still so in love with this one from nearly a year ago. By Dani Johnson @ New Hope Tattoo (Hampshire, UK)