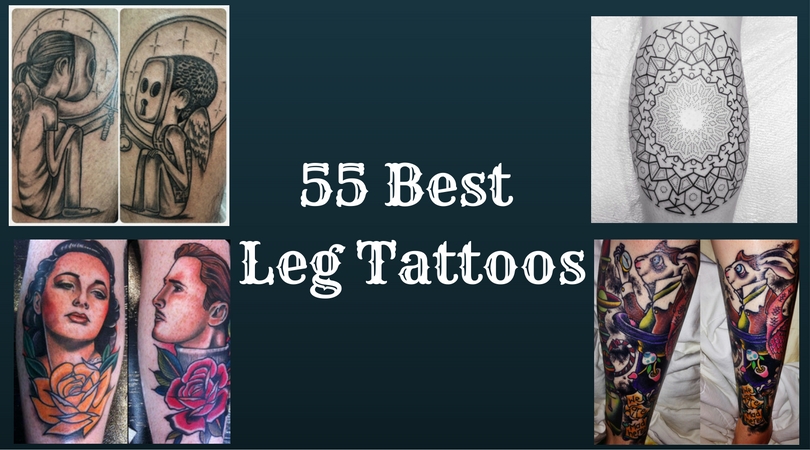 Tattoos on legs look really cool and stunning. They not only give your feet a chic appearance but also boost your overall personalities. In this article we have brought for you some of the all time in vogue Leg Tattoo designs. Not one, two or three but a whooping number of fifty-five tattoos. Keep reading to discover more..

The name of the tattoo design and the artist are specifically mentioned so that its easy for you to locate the artist, in case you want to get yourself  a tattoo done.

267. Travel Themed Tattoo by Joslin at Jackalope Tattoo in Minneapolis!

265. I got a tattoo of my goofy rat Mercury. By Rhiannon Hustwayte, True Tattoo, London

263. Made by me at Black Diamond in Radford, Virginia

261. The White Rabbit from the original book edition of Alice in Wonderland, by Keith C (me) at TNT Tattoo Co in Haltom City

257. Just got my second tattoo of a viking compass amd the tree of life, by Gabi at Xperience tattoo Iasi, Romania. Tell me what you think about it.

254. Hunter from destiny on my calf done by Tyler Nguyen at My Little Needle Tattoo in Plymouth, MI

248. My owl and pussy cat tattoos. Done by Owen Paulls when he was at lady luck tattoos, Portsmouth UK

247. Got this beauty today! Done by Aaron Francione at Magic Eye Tattoo in Philly

246. Another one from my dude, Jake Ross out of Everlast Tattoo co. in Ohio.

240. Neat lil pineapple I got by josh Anderson at 570 tattoo

239. Another piece of my leg sleeve finishes! Done by Jason Flash Kuhn at the Electrik Chair in Wichita, KS

237. Here is my first and only tattoo, a slightly gothic homage to the great creator Hayao Miyazaki. Done by Cutty Bage of Hollowmoon Tattoo in Boone, NC!

233. My jackalope with California poppies done by Natalie Phillips at Frisco Tattoo in San Francisco. In love with it!

231. Got a Hanya Mask for my first ever tattoo. Done by Jiun at InkCraft Tattoo Studio, Kuala Lumpur

230. My latest one and possibly my last for a long while. Done by Joe Helm at Merkai tattoos, Crystal City, Mo

229. My new Tattoo made by Gabor in MagicMoon Tattoostudio

228. My second tat. Mix my love of science and the occult. Done by April at Broadwing Tattoo in Bowling Green, OH

226. Griffin Trophy from The Witcher 3 done by Necronimitron at Perception Fine Body Art in Dallas, TX

225. My new tattoo done by LIAMJEYTATTOOS done at the Perth tattoo expo

224. Newest piece done by Morrison Vo at Integrity Tattoo in Royersford Pennsylvania. (Every year my wife and I get a themed tattoo for our daughter and this year was dragon)

223. Nostalgia tattoo with the inspiration in the background. Haystack rock in Cannon Beach Oregon. Tattoo done by Bella at RollingGypsy tattoo in Spanaway, WA.

221. Tattoo I just got while on vacation. Done by Keely Glitters at Jolie Rogue Tattoo in London, UK.

219. Time in A Tree, Raleigh Ritchie (Jacob Anderson) Album Cover Artwork | Done by Mark at Under The Gun Tattoo in NJ

218. Joined the club! First ink by Adam Stogner at the tattoo convention in Biloxi, MS.

215. Was told yall would like this 80s Futurism/Retro piece to represent my stepdad/mother and I! Done by Zoey Mui Vu at Houston Tattoo and Brow Studio.

212. My Captain America tattoo. By Jimmi Mariani at colorfast studios in south Florida.

206. Mr Toad on my leg done by Ash Crow at The Crow Quill in Southampton, England

205. Got my first tattoo on my left calf (at Leib und Seele in Dorsten, Germany by Dirk Reuter)

203. New Grim reaper I got today under my lil peep memorial tattoo

202. [WIP] Gohan from Dragon Ball Z by Andy at Horseshoes and Hand Grenades in Chicopee, MA

201. The day that changed my life, done by Jim Francis @ Vantage Point Tattoo in Milwaukee, backstory in comments

198. Snagged this today from Jessie Rose at Electric Panther Tattoo in Cabot, AR.

196. Trumpet by Jacob Kearney at Two Olives Tattoo in Chicago

194. Fish by Ling Jin at BlindReason Tattoo in NYC

183. Dedicated to my mom. Done by Deanna Wardin at Tattoo Boogaloo in San Francisco, CA

182. Little something I got done yesterday for my favorite NFL team. Bear down! Done by my guy Walter at Illinois Tattoo Company in Bloomington, IL. Super clean work.

180. Another amazing addition to my leg by Nick Giompalo at Black Skull Gallery in Huntington, WV

178. Dragon by Frank William at Smith Street Tattoo in Brooklyn NY. My first by Frank, I’m very happy with it.

177. My first and second tattoos, made on the same day by Fabrício in Old King

176. Rainbow Road on my leg (ditch) and shin, by Nicholas Tidler at Purple Heart Tattoo, Knoxville

175. Momma and baby possum by Tyler Nguyen (me) done out of My Little Needle tattoos, Plymouth,MI

172. Line work of my first tattoo! A Bat with Chrysanthemums done by Matt Sandoz at Amulet Tattoos in St. Petersburg, Fl

171. Another one for the collection – by Sam Kane at Ocean Ink Tattoo

165. Carla Maree, Artful Ink in Perth, Aus. I am game for calf but the swelling was a shock to me hah

163. Got an addition to my brain riding a bike. Done by Tiffany Raffaelle Roman at Spirit Gallery Tattoo, New London.

162. Tribute to my favorite picture of my good ‘Ol boy! Peighton Ploudre of Lady Luck tattoo in Phoenix, AZ

161. Done by Ashley at Temple Arts Tattoo in Hagerstown, MD

159. What do you think guys? . By Aldo Saenz at Merida, Yucatan, Mexico

158. I took this stupid picture of my fish while fishing. Done by Orville @ Catalyst Arts Collective in KCMO

157. Fireman tattoo for my dad. He loves it and so do I. Done by Aaron Jackman of Ghost Tattoo in Las Vegas

152. My first tattoo, on my calf. Jason at Congress St Tattoo in Portsmouth NH

151. My latest piece, and one of my favorites! Spooky Elvira ghosty from Johnny Vampotna, done at Art Work Rebels in Portland during a guests spot 🙂

150. Finally at 35 years old got my first tattoo by Pepelini at the Black Lagoon San Jose Ca

143. Done by Klint Who at Cornerstone Tattoo in Senoia, Georgia.

142. First one. My asshole cat by Vienna at Battle Born Tattoo Reno, NV

141. Got matching tattoos with my mom. Done by Jordan Brenton at lv.100 studios. St. John’s, Newfoundland.

136. My psychonaut tattoo by Peppe Gallà, The Kingdom Tattoo, Cefalù, IT.

135. Dragonite Tattoo by Annalou at Diligent Lobotomy in Tucker, Georgia

133. My new Calvin and Hobbes tattoo, done by the very talented Chris Morris of Semper in Edinburgh (guesting in Cardiff)

130. Hige and lunar flower by Jessica Friskney at OM Tattoo Fort Wayne, IN

129. My new Calvin and Hobbes tattoo, done by the very talented Chris Morris of Semper in Edinburgh (guesting in Cardiff)

128. John lennon by Ker at Sailor Max in Aberdeen, Scotland.

126. My parents when they were young. Done by Baby at Mom’s Body Shop in San Francisco.

125. My newest addition! Got it done by Austin at Scottish Rose tattoo in Minnesota !

123. Session three of my Gundam leg sleeve. By Michael Bogle out of Eye Cand Tattoo

119. Continuing my sleeve! Don’t by Teri at Animated Canvas in Lexington, SC

117. Sunflower done by Becky at Bravest Kids in Bury

116. Ash and Eevee done today by Bradley at Atomic Zombie in Edmonton

114. Done by Kady Wilie at Mainstay tattoo in Austin TX

112. Tiny Carrot- done by Jose at Under the Needle

111. My chinchilla by Samantha Read (guest spot Grit N Glory, NYC)-following the trend of all the amazing animal tattoos here

110. Welcome to JurassTHICC Park by Tony Johnson at Platinum Koi in Huntsville

108. Got this done by Jesse Smith at Perfect Image in Grand Bend, Ontario Canada! Absolutely in love with it!

105. An Opossum to celebrate becoming a US citizen! By Kimber, at Cowgirl Tattoo

102. Born To Lose Tattoo by Wayne Evans at Lucky 7 Tattoo in Libertyville IL

94. The start of my Pokémon x Avengers Tattoo by Tahlia @ Tattoo Cartel, NSW

90. One shot one kill space wolf by Jamie Santos {Three of Swords in Syracuse NY}

89. Kodos from The Simpsons by Cody Goins at Lucky 7 Tattoo in Libertyville IL

85. My first tattoo – Memorial flash for my MA done by Bill Wang at Classic Tattoo in Fullerton

84. My Norse Mythology piece done by Kimri at Element Tattoo in Bozeman

80. tle thrush, columbines, and willow boughs by Matt at Fatty’s in DC

79. second Tattoo, made by Lisa Samhain from Nightchild Tattoo in Munich

76. I hope you have a very knife day. By Steven James at Grey Harbour in Hamilton

75. MIDNA Tattoo with Triforce at Giahi in Winterthur

74. Tea shark by Huka at Timeless Tattoo in Los Angeles

69. The excitement of rolling a 20 in dungeons & dragons. Done by Tom Heustis of Thirty Six Black Art Collective in Orlando

66. My best friend and I got matching tattoos. Done by JR @Rose&Raven tattoo shop

60. By Joey Peterson at Blue Byrd Tattoo in Middletown, OH

55. Architectural Leg Tattoo by Josh Stephens, Hold it Down Tattoo.

48. Robot tattoo by Zach Black at Riverwest Tattoo in Milwaukee

39. Done by Riley Hogan of Bushido Tattoo in Calgary

34. She is a master with color! Leg piece done by Kelly Doty, formally at off the map tattoo in Easthampton Ma.

33. New leg tattoo. I know it’s not a perfect depiction of the scene but I love it and thought you all would enjoy.

31. My old Navy buddy is having his leg amputated next month. This is his new tattoo.

28. Batman leg tattoo – Art from the Absolute Edition of the Long Halloween by Tim Sale

27. A friend of mine had Errol Flynn & Olivia De Havilland tattooed on the back of his legs.

19. Fresh swordfish on my leg

16. I drew a sharpie tattoo on my leg in math class today.

15. My mom and brother are incredible artists, she did an ink drawing of her grandfather from a photograph, my brother is a tattoo artist and replicated the portrait on his own leg.

12. Two sessions into my leg piece.

11. Newest addition to my nautical leg!!

08. Progress on my Alice in Wonderland leg sleeve – by Mike Nomy at South Shore Tattoo, NY.

07. First session on my medusa leg piece by Lindsay Dorman

04. My Beemo riding haunter tattoo on my leg!