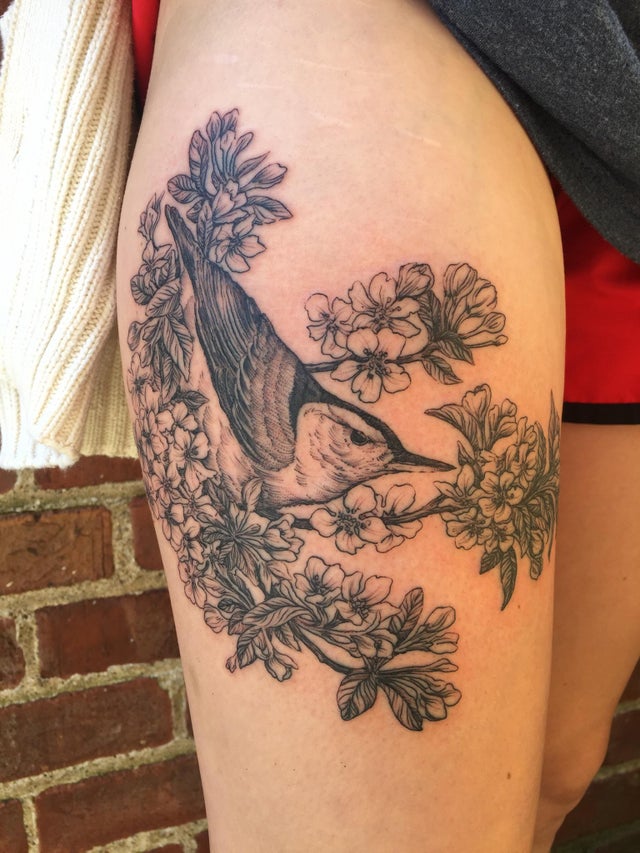 Birds are a symbol of freedom. Extending their wings, they soar across the open sky. Not just birds are free-spirited but also posses a variety of other qualities such as commitment and loyalty.  Bird tattoos are one of the best ways to portray their embodiment qualities that have been universally understood and have inspired humans since immemorial time.

There are countless species of birds, for example, eagle crows, vultures, falcon and many more and each of them symbolises something unique and positive. Birds are the perfect metaphor to display feelings and life.  These flying creations of god are beautiful examples of eternal hope and divine beauty. They represent different ages of life and are also best for those who are looking for inspiration within.  All human emotions such as love, faith, devotion and humanity can be depicted through bird tattoos.

Ducks are a symbol of loyalty as they are incredibly protective to their families.

Tribes consider the feathers of bird representation of medicine and healing.

An eagle’s travel is not restricted to the direction of the wind. This is why it is considered a symbol of bravery and rising from failures.

Humming bird is believed to bestow vitality and strength to those who wear it. Also, it is a representation of love, grace and beauty.

Small-sized lark bird touches humanity through spiritualism and beauty and is a popular tattoo design among European enthusiasts. It is believed to bring good fortune and opportunities.

The owl symbolizes insightful and continuous urge of humans to seek truth and knowledge. Owl represents mystery as well.

For some spiritual beings, the bird’s ability to fly is a representation of the journey of the human soul from current life to the afterlife and free spirit of the soul that transcends.

Geese are an excellent choice to symbolise marital bliss.

In every religion and culture, bird designs are used to symbolise their beliefs.

One more reason that makes bird tattoos accessible is that they are never out of style. They are a good choice if you simply want to focus more on nautical design. Today both men women are seen sporting bird tattoos in different forms because of its artistic design, beautiful colours and excellent designs that look astonishing.

Below are bird-inspired tattoos that represent human traits or values. Get them inked to convey a specific message according to your preference or because they look beautiful on your skin or simply to manifest your love for birds.

100. Iqbal @ Fall Back Down tattoo in New Westminster, BC

99. My Robin tattoo by Leanne Fate at North of Winter studio in Manchester (UK)

98. Celtic Raven. The start of my sleeve. Tattoo by Jimmy Bissette at 401 Tattoos & Antiquities in Fuquay-Varina, NC.

96. Cover up done by Josh Heil at Eclectic Ink & Artistry in Ogden, UT

95. If you know, you know. Now get in the flask! Dane Smith, Fountain Square Tattoo, Indianapolis, IN.

94. Done by Sabo at The Secret Door in Brooklyn NY on my calf!

92. Blue jay at Inkology by Adriana Hallow in NYC

89. Custom All Might tattoo done by Neil Comeau at Seven Horses Tattoo in Concord, NH

87. Third tattoo, done by Tallis at ‘Skin it’, Ogden Utah

86. I got a jackalope tattoo – modeled after my pet rabbit! Tattoo by Elle Noir @ Red Quill in Lincoln, NE

82. Harpy eagle from Jonathan Penchoff, at Til Death in Denver, CO

80. A beautiful transformation of my very first tattoo done by Ben Mack @ Crown of Thorns Tattoo in Worcester, Massachusetts ! Before and after

77. Bird of Paradise by Jawn Suzuki at All Sacred Tattoo in Denver, CO

76. My newest addition! Done by Kier Gill at Deadhouse, Manchester.

75. Bird and Maters by Nathan Mickle, Branded Tattoo in Nashville

70. Freshly done Crow fern tattoo by Gibbs at Ascension Tattoo in Orlando, Fl. So happy with how it turned out!

67. Covered up my first tattoo with cardinals by Adrian at Puro Arte in San Antonio, TX.

64. A few from Carlos Perez out of Magic Eye Tatoo. Philadelphia, PA

62. The tattoo I got today received the approval of my 22yo, so I felt it might be worthy to post. Shane Blue Dogg Tattoo, Stuart FL

55. My egret done by Aygul from Bright Side Tattoo in Copenhagen.

53. Just finished my sugar skull owl and had my old independent cross redone. Thanks to Jacob at Art and Soul in Winnipeg.

52. Great blue heron silhouette done by Todd Aaron Bruce at chameleon ink tattoo and body piercing, super happy with this and its my first tattoo!

51. My second tattoo, unhealed, a raven with a rose, done by Emily Simmons at Big Bear Tattoo in St. Peters Missouri! My first post ever in Reddit, I hope you enjoy the art as much as I did c:

50. Here’s one I got a while back on my calf. I don’t have a healed picture. By Ell Torres at Goldroom in Leeds, England.

48. A white-throated bee eater on a twig of acacia. Done by Alicia Gory at Grit n Glory in NYC

46. I picked this traditional eagle out of an old flash book @ One Love Tattoo, Prague, by Axel

45. Cactus Wren In flight. Another addition to the soon to be full western sleeve. Done by Landis at Tat-Fu, Flagstaff, AZ.

42. Cover up on my arm done by Boston Rogoz @ Living Canvas in Tempe, Arizona

39. Owl holding my family crest by Josh Stono at Revolt Tattoos in Vegas

38. My first tattoo in loving memory of my mother Robin. By Kelsey @ 1025 tattoo Rossland, BC

37. Inspired by my favorite sound in nature. My best friend since fourth grade made the initial design and artist collaborated. Done by Terry Warn of Change of Tide in Dallas, Tx

33. My first tattoo!! Inspired by one of Frida Kahlo’s self portraits. Done by Natalia Marin at Ocho Placas (Miami, FL)

30. Got one of Brian Serway’s paintings as a tattoo (with his permission): Done by Biex at Timeless Tattoo studio in Oslo, Norway

29. Nate Reel at Patriot Tattoo in Farfax Virginia did this piece on honor of the album For Those Who Have Heart by A Day To Remember

28. Finally got my first! Done by Natasha Bertram in Chicago.

26. Hummingbird and the moon phase on the night my daughter was born. Done by Sid Cout at Black and Blue Tattoo in San Francisco.

25. Traditional eagle done by Mike prior at Lady Luck Tattoo in Langley, BC, Canada

23. Floral hummingbird, done by Carrie at 920 Tattoo in Oshkosh, WI

22. Just got my quail from Opie at Bee Ink in Minneapolis, MN!

21. On the 18th anniversary of 9/11 I’d like to share my memorial. Kevin Soto 12Oz studios Deptford New Jersey

19. My first tattoo done back in February by Kevin from Indigo Soulmates, let me know what you think 🙂

17. The start of what will be my Norse Mythology sleeve by Carolina Annis, No shop atm, Petersburg VA

13. Ukrainian Ironbelly by Rhiannon at Magik Dragon in Gainesville, GA

12. Harris Hawk, by Matt Stines at No Regrets Tattoos in Champaign, IL.

11. Mandarin Duck, by Matt, at Valhalla Tattoos in Southern Pines, NC, to commemorate my trip to Japan and finding out they also live in NC

07. My Great-horned owl by Brenna Rose of Tophat Art Collective in Bakersfield, CA

05. My first completed tattoo @ no woes tattoo studio in Nottingham by Katie

02. My first tattoo: Phoenix by Colin at Savage Tattoo in Ogden

01. Beginning of an animal sleeve, Matt R at Chronic Ink