Skip to content
50 Half Sleeve Tattoos For Passionate People 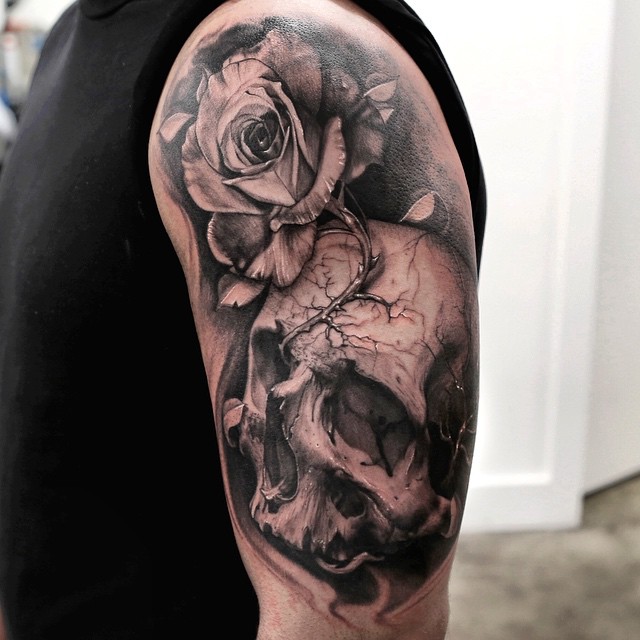 Half Sleeve Tattoos are one of the most popular and trending tattoo ideas for men and women. I am sure many people chooses a design before selecting a body part for it. Picking up a spot before the design can make it hard, but I am not saying that it cannot be done. Therefore we are today focusing on Half Sleeve Tattoo ideas for men and women that will basically show you how these tattoo look before you get them.

Another important aspect of getting a tattoo on your sleeve is the comfort of hiding and unhiding it. People can roll up the sleeve of their shirt and your tattoo gets visible, a roll down would hide it. Isn’t that ideal? You don’t have to overexpose to show your tattoo, plus you don’t have to always show it.

Men having good arm sizes will be fascinated to have these tattoos on their forearm or bicep as it adds to their personality and a bodybuilder will have no time in choosing these. So, lets get started and see the most creative half sleeve tattoo ideas for men and women.

110. Both sleeves finally finished. All shading done tebori by Yushi Horikichi at Sinsin Tattoos in Antwerp

109. Dark Side of the Millennium done by Zane @ Adventure Tattoo in Nashville, TN

107. One step closer to a quarter sleeve! Done by Jennifer Edge at Main Line Ink in Chattanooga, TN.

106. My first big tattoo made by Piotr Szencel on skellefteå tattoo fest.

105. My geometric raven and skyline by Scott at Ever True Tattoo in Portland!

104. My Bon Iver inspired piece done by Sam Kerr at Oregon Tattoo in Salem, OR!

103. A different take on a serotonin molecule by Luke at Absolute Tattoo in Reno, NV.

102. Done by L’Oiseau at Faubourg Tattoo in Collioure, France. Traveled from the States just for this windy girl!

99. Got my tattoo in 2016 at Slave to the needle, Seattle by Amanda. I am from India (tiger is national animal), naturalized in US (eagle) with a love for travel (compass), cancer (sign) and lotus which has lot of meanings in Hinduism/Buddhism (purity of soul, not having attachments)

98. Books! Nicole Eveland, Idlewild Tattoo, Raleigh, NC. Covered up a bad tattoo I got 23 years ago.

97. My first tattoo: smoky teapot, done by Will Pacheco at Taiko Gallery in Germany, Berlin

96. The second tattoo of my Tolkien sleeve, The Dragon Helm of Dor-Lomin, done by Justus at The Nook in Jefferson City, Missouri

95. Francisco Sanchez from Inkslingers part II. Represents Texas, where I was born.

94. I’m not gonna hurt ya. I’m just going to bash your brains in. Done by Barrett at Electric Tattoo in Asbury Park, NJ.

89. Cover up of an old tattoo by Kevin at Off the Wall in Bartlesville, OK.

88. Tomura Shigaraki and All For One from My Hero Academia. Done by Moses at Get Up Tattoo Society.

87. Got a cheap tattoo in college, finally saved up and got it reworked. My guardian angel done by Killian Moon at Ink & Dagger Tattoo in Roswell, GA

85. My first tattoo! Inspired by Tyrael, the Archangel of Justice from the game Diablo – done yesterday by Pradeep Junior, Astron Tattoos, Bangalore

83. Jack, Sally, Oogie Boogie, and some pumpkins on my thigh done by Rob Vincent at Marks of Art in San Jose, CA I’m sitting on the couch so that’s why there’s lines and it’s tilted a bit.

81. Cover up I got a couple weeks ago. Done by Addam at Permanent Paint Tattoo, Ky. The design is from Cricket Press.

80. Death Tarot Card by Alie K at Tattoos This Way – Toronto, ON

79. My second tattoo. Done by Fish Tattoo in Romania, Hunedoara. I love the way it looks. What do you think about it?

74. Moon Goddess by Sydney at Outsider Collective, Vancouver BC

73. Finally finished this piece this week with Haley Cas at Gun N’ Needles in Minneapolis.

70. Fresh off the table! Gemini by Hannah (the apprentice) at Breaking Skin in Bridgeport, Ohio

68. The start of a massive duel cover up. Done by Nicole at Speakeasy tattoo Los Angeles

66. My newest Calvin & Hobbes piece by Marion at Art Attack in Richmond, KY

61. For my mom who used to sing “I Hope You Dance” – Leeann Womack, to me. By Nick Bridwell at Golden State Tattoo in Garden Grove, CA

60. Demeter. By Odd (Seoul) while he was doing a guest spot at Chronic Ink, Vancouver.

58. First Tattoo, based on an Isaac Asimov cover. By Steven James at Grey Harbour in Hamilton, On

54. Saturdays treat to myself. Done by Simon k Bell in Liverpool, UK.

38. Half Sleeve Tattoo of bird

35. Beautiful skull on half sleeve

34. Realistic black and white lily tattoo on half sleeve

29. Half sleeve tattoo of woman face

27. Deer Tattoo on Half Sleeve

17. Roses and skull half sleeve tattoo

16. Modern idea for half sleeve tattoo

14. Flower Tattoo On Half Sleeve

Did you like the awesome collection of half sleeve tattoo designs? Subscribe us for more and keep visiting Tattoo Luv for the love of Tattoo.