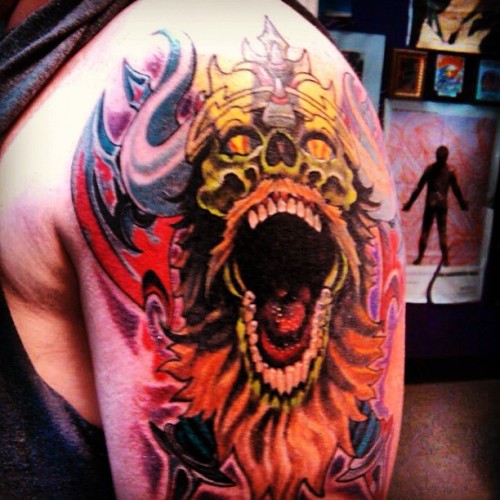 273. My leopard shaman, done by Emma Eichner of the Darling Gray in North Conway NH.

272. Narnia Quote by Madeline at Broken Clover in Tucson.

271. Phoenix by Tubi at forevermore in Glasgow. My first Tattoo but definitely not the last.

269. New tattoo compliments of Brad Turek. He does great work and has free handed everything so far.

265. My back arm tickler for time out tattoo in Chicago, Illinois by Keara McGraw!

264. First tattoo by Chado at savage tattoo in Ogden, Utah!

263. Got this bee today for my dad! Super stoked with it. (Britty – Titan Tattoo in Nashville, TN)

261. Wife and I got matching tattoos by TK at Chronic Ink in Toronto

259. My newest tattoo. Done by Joey Malia at Transcindent Tattoo in Kankakee, Illinois.

258. Wolf tattoo~ By Artist Zoey at Studio in Shijiahuang, China

256. Courage the Cowardly Dog, by Mikey at A Different Drummer, Cape Girardeau Missouri.

255. been planning this out for about a year, so happy with the results. The Great Wave @ Empire Tattoo in Pittsburgh PA

254. Hut in the mountains by Mentat Gamze guesting at Sashatattooing, Barcelona

253. My Newest Addition. Done by Leo at Art Dynasty in North Carolina

247. Celebrating my one year in Texas the best way I know how. Bull skull by Chad at Embrace the Chaos in Waco, Tx.

246. Memories from NZ created by myself and Aries from Exile Ink in HCMC, Vietnam

245. Junior did not disappoint. Red Wing Tattoo in Winona MN.

243. My new tattoo by Josh Mcnair at Jackson St Tattoo. In Roseburg Oregon

240. Ship to add onto the arm. Done by Emily Elinski at Armature Tattoo in Pittsburgh, PA

239. My first tattoo. My dogs paw with their names inside. Done by Jens from all ink tattoo, Denmark

238. Nothing too crazy but I like it. Done by Jon Butcher. Modern Love Tattoo, Buffalo, NY

233. My first tattoo! So happy i finally got it done

226. My first session for this beauty. Been dreaming of this tattoo for years. Waiting to get some colour and then watercolour splashes. Done by Apex Custom Tattoos in Adelaide!

225. My father got this tattoo in Paris in 1969. This is the tribute piece I got done yesterday. My dad’s reaction: “Mine was that colourful 50 years ago!”

224. eight of cups to commemorate my upcoming move, by sam park at all wolves no sheep in brooklyn!

223. Got my first tattoo on Friday! Artist did a hell of a job! (Jason Hartz/From the Heart Tattoo, Wildomar CA)

220. A representation of Alaska- done by Rachel G at Exotic Eye studio in Homer

218. A clockwork orange done at Fountain City in Kansas City by Laci

208. WIP on my Japanese suit by Titus in Munich, Bavaria

205. Tattoo by marko @ the hand of hope in Stockport

202. I’m concerned about how my design will turn out. Any advice?

199. Steadily been working on this fantastic piece with Jess @ Art Club Tattoo in Danbury

196. Newest tattoo of my darling Iris from lily (@needle.mistress), cock a snook, newcastle

195. Taken right after it was finished! Done by Cat from Patriots in Fairfax, VA

191. My first tattoo, featuring my two cats, done by Niki at Tattoo People in Toronto, Canada

189. By Kris Roberts at serpent and the rainbow tattoo in Asheville NC

188. Working on traditional japanese dragon half sleeve. This is two 7 hour sessions, back to back. Hopefully only one more is needed. Artist is @elektrikmarkus (Studio “Ekersgatan 13”) from Örebro, Sweden.

186. On Top of the World. Tattoo done by Doozer at Silver Key in Davenport, IA

185. 3/4 snake and hanya done by Andy Tran at My Tattoo, Huntington Beach California.

184. My snake & orchids done by Evie Alexandra at Diehard Piercing and Tattoo in Albany, Oregon

181. By Kris Roberts at serpent and the rainbow tattoo in Asheville NC

180. By Kris Roberts at serpent and the rainbow in Asheville NC

178. Some angery bones I got today, by Tattoo Sioux at Good Faith Tattoos, Boston, MA

175. Poppy by Levi at Kingdom Tattoo in Atlanta, GA

170. Kudzu suffocates everything it covers. And then a helping hand pulls you up + out. Done by Dusty at SparrowHawk in Atlanta, GA. (got this in January but just found this sub!)

169. White-throated dipper sitting on a birch twig, lily of the valley and lady bugs by Bård Tjelta at The Serpent Twin in Oslo, Norway

167. An adaptation of a Virgil Finlay illustration, by Leta Gray at Spirited Tattooing Coalition in Philadelphia, PA

166. I’ve always been obsessed in giraffes so finally I have my amazing new giraffe by Scott at The Country Gent in Holmfirth

163. My first tattoo and I couldn’t be more happy with it. Done by Asa at Liquid Courage in Omaha, NE

161. Tattoo of Apollo done by David at the Black Dahlia Tattoo Gallery in Ohio. My 1st (of many) tattoos

156. Fresh neotraditional astronaut, by Andrew at Otherworld in Glasgow, Scotland

154. Just got a custom piece from David Peyote in Montreal! Absolutely blown away by his art and skill!

152. Very first tattoo: portrait of my horse by Marie at Martistic studio in Portneuf

149. Modest Mouse, Building Nothing Out Of Something. By Chuck at at Revolver Tattoo; New Brunswick, NJ

144. The beginning of my sleeve! Hercules & Perseus done by Robert Pho at Skin Design Tattoos in Honolulu

136. Neo-Victorian Owls (start of a half sleeve). By Mike Schweigert at Electric Tattoo, Asbury Park, NJ

135. My amazing traditional skull made by Bruno Miguel, at Rusty Dagger Tattoo (Lisbon)

134. The Green Ranger by Dan Kelley at Skull & Snake Tattoo in North Berwick, ME.

131. “Only Judy can judge me” – by Rachel Baldwin, Bold as Brass Tattoo Company, Liverpool, UK

127. My pinup nurse by Nason Dilts at Serenity Body Arts in Southampton

125. Traditional tiger by Nathan Donahoe @ Ace of Swords in Regina

124. My first tattoo, done by Alicia at the Rolling Sea, in Nova Scotia

119. flowers, done by Chris Spence at The Fox and the Machine, in Calgary, AB

111. Another piece for my sleeve. The Reaper. Done at Drop dead Tattoo by Kristian in Sweden

110. looking for help on shading/filler ideas for my shoulder piece

108. 1/2 of my floral half sleeve (it wraps all the way around) — Artist: Lydia Hazelton @ Fox and Dagger Tattoo

107. Other side of my floral half sleeve (pls ignore my goosebumps) – Artist: Lydia Hazelton at Fox and Dagger Tattoo

102. Front part of my sleeve is complete. Time to start on the inside! By Rick @ Hitlist INK in Houston

100. My Sun Wukong tattoo done by Ans from Tattoo Machine

99. My floral half sleeve done by Siobhan Alexander at Bird and Bones Studio in Bangor, Maine.

97. My Astronomical/Doctor Who sleeve. Done by Shenan Tucker at Gold Tiger Tattoo in Saratoga Springs, NY.

94. The album art of Nothing is Beautiful by SPITE, done by my bud Seth down at Imperial Tattoo in Wausau, WI!

90. My latest tattoo done at the Seattle Tattoo Expo. Done by Isaac Aguila at Bearcat Tattoo in San Diego, CA

89. Mama and baby koala by Greg at Atomic Roc in Rochester, NY

86. My meditation/outdoors themed tattoo. Done by Doozer at Silver Key Tattoo in Davenport

83. You guys seemed to really like the line work I posted before, so here’s the final outcome! Done by Kyle Giffen at Little Pricks Tattoo

82. Bear and demon by AJ at Civility and Unrest in Bellevue, WA

79. Tattoo inspired by the film Hardware, by Jamie at Tattoo Revival in Winston-Salem, NC

78. Alamo taco I had done last night, by Jackie, at Rings of Fire Tattoo in downtown San Antonio

74. SRV tattoo by Cody Buck from Buckin Tattoo in Colorado

69. Dotwork Planchette by Alicia Anderson at Lucky You Tattoo in St. Petersburg

65. Got my first tattoo some weeks ago, and I love it! Done by Yoshi at Master Ink Tattoo Nagoya

62. Kelsie Havener at Scarlet Raven in Lincoln, Nebraska. Half of a full trash polka sleeve.

60. My first tattoo: An octopus done by Alex Bock at Oak and Iron Tattoo, Brisbane

59. Flower lady done by me (Shane Olds) at Rise above Tattoo

58. Tree by Ash at 7th Street in Little Rock

56. Lady Morphing into Space by Gio Luca at Lucky’s Tattoo in NoHo

55. One more session to go on this one! Done by Jason Norton at Htown Ink in Holland

54. 1st tattoo/session. Elephant with Purple ribbon for my dad. By Barry San at Tattoo Boulevard in Chicago

52. Done by Alisha Gory at Grit N Glory in NYC

46. Done by Jacob Dynes at the Studio tattoo in Roseville

45. Done by Gordon Combs at Til’ Death Denver

44. D&D/Witcher sword Inspired by another post from here by Josh Hurrell @Legacyink, UK

41. Owl and rat done by the wonderful Kira at Ink and Water, Toronto

39. My grandfather, an invincible mountain man from Montana, passed yesterday. My tribute to him. Done by Chris Mallory @ Independent Tattoo in St. Joseph, MO

38. My druid lady from Lauren at Liquid Amber in B.C

37. Mayan Quetzalcoatl God , in an uroboros form made at tiajuanatattos Tijuana , Mexico

36. Just got married in Poland and this was what we used instead of a limousine. Done by Jakub at Till Death Tattoo, Toruń Poland

32. Cre8ive Ink, Sophie, Melton Mowbray. Sat for five hours for this and I love it!

31. Circuitry yin yang with the eye of agamotto by Taylor at Yes it hurts in Beaufort SC

26. My pup who passed away in half geometric form done by Anthony Triana at 27 Tattoo, Phoenix

24. My love for Disneyland, Walt Disney, and Mickey Mouse was brought to life! Done by Junior at Club Tattoo in Las Vegas!

22. Max done by Marqui Watling of Get Up Tattoo Society, Cincinnati

21. Just got my first tattoo! Its an adrenaline molecule and I’m looking forward to adding more molecules down the line! Done by Lisa Bracero at True West Tattoo in San Luis Obispo

19. Clock being absorbed into a black hole. Done by Tye at War Kings Tattoos in Orlando

18. Check out my new tattoo, done by Ally at vaders.dye

17. Cat Skull For My Boy! Done By Nick At La Planque In Montreal

15. Baphomet by Cruz at Freedom Tattoo in Santa Cruz

14. Badass piece by Eric at Modern Tattoo in North Chicago. My favorite tattoo so far

10. My Athena tattoo by Jack

5. Got my first tattoo. Done by Milana Soya at Good Sign tattoo in Minsk