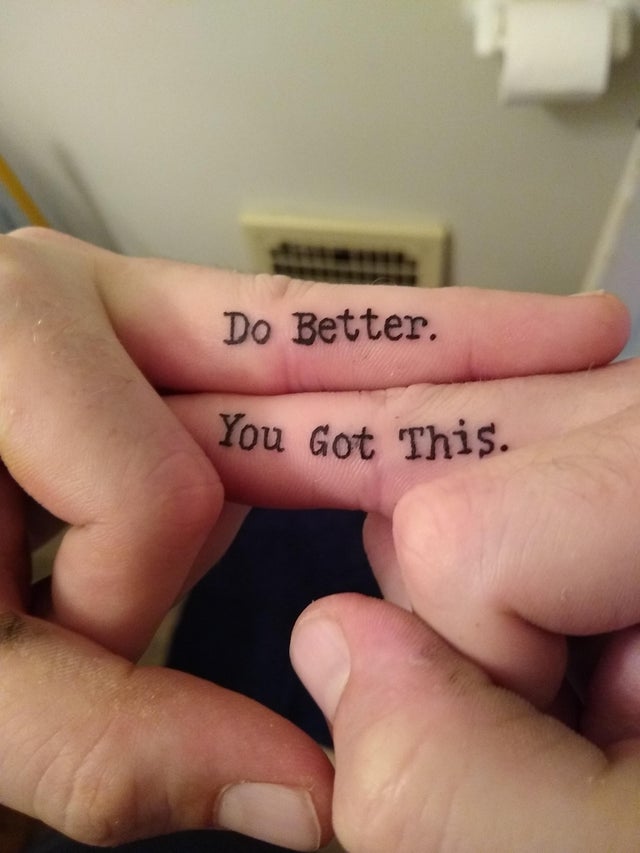 41. I’ve had a 14 year break between tattoos and finally started working on my Alice in Wonderland project. Done by Maddie at Artfuel, Wilmington, NC.

40. Inspired by my favorite book and one I’ve been wanting for years, done by Larry at Oasis Collective, Gainesville FL

39. Dune. My first tattoo by Memo Gonzalez at Embassy Tattoo in DC

36. ‘Home is where the eggs are’ by Dalton Derks at Crackerjack Tattoo, Fort Worth TX

33. Simple one but I loved the idea. Cheat code for lowering your wanted level of GTA vice city. Tattoo by Zack at first world tattoos in Niles, Ohio.

31. My tattoo of the word “Quixotic” with the “o” as the hydrogen atom…. Done by Nick Osbourne from Black Sheep Tattoos in Ravenna, OH.

30. Done by me, Heather Lynn @heatherlynntattoo at Witch City Ink in Salem, Mass

29. I got this little reminder tattooed on me along with three other pieces last week. It’s good to remember when I’m depressed, but also when I’m happy to take note that everything has balance and I should appreciate the moments I’m given. ~ tattoo by Gene Scott at Burned Hearts – Columbus OH

26. Sun done in Philadelphia pa, need to cover it up because the artist messed up big time… can you guys please help with ideas on how I would fix this

25. Two New ones by Matt Perez in Las Vegas

24. All Things Dissolve in Time by Nick Mcvey at Goodfaith Tattoo in Boston, MA

21. The first half of Maxwell’s equations of electromagnetism (and then some). The second half will go on my left arm. Tattoo done by Boz at Iron Buddha studios in Clifton Park, New York.

20. okay so i did this tattoo the other day, and it won’t let me post to any other forums, but if i could get any input on the healing process of this guy.

18. Need advice and ideas on what to do with this f up of a tattoo, UK.

17. Writing in the language of the far off future, from the Graphic Novel, Paper Girls. By Danae at Art Sharks in Saskatoon, Saskatchewan.

15. My first tattoo had to be a sentimental one, my moms favorite saying to me in her hand writing! Done by Elekktra at Beneath the Surface in Las Vegas, Nevada.

14. ‘Ahimsa’ non violence and compassion to all living things. Crossover tattoo between my passion for yoga and veganism. By Mike L at Flagstaff Tattoo company, Flagstaff AZ (Fresh)

09. Mac Miller and lyrics from Nothing’s track famine asylum. Both tats and the other two on my chest done by Shauncey Fury of Sacred Ground Tattoos in Pensacola, FL.

08. Finished my Mother/Father set today – just in time for Father’s Day. Done by Jeff White at Urge 3, Penticton, BC

06. I got a Star Wars tattoo by Danny at Twistid Ink in Inverness, FL

05. Impulse ink in Hudson WI jessie is my artist and she is so talented

04. My first one (followed by many since), done last year by NG Ink at Legendary 60’s Tattoo, Miskolc, Hungary

03. Fresh ink by Craig Brock at Ink and Dagger in Alpharetta GA

02. Nothing fancy. But it means alot to me. Almost healed up. Done @ In Your Face Tattoo. Fond Du Lac, WI