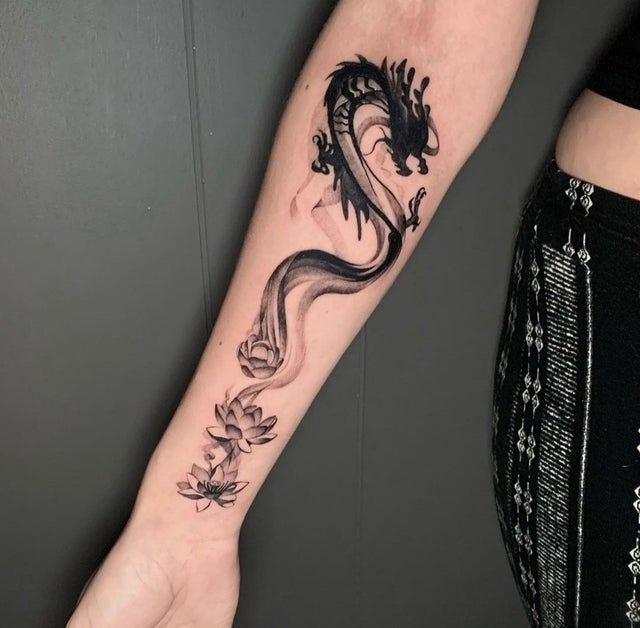 50. Done by Marco at Monsters Tattoo in Yokosuka Japan

48. Freehand python, Ed Taemets, Melbourne, Australia. So stoked with how this turned out!

46. Haku and Totoro done by Rum at Timeless Tattoo in Monroe, WA

44. By Nathan Bellenger, Lotus Noir, le lavandou, France after getting my rescue swimmer

43. Snake by Louise @ Down On Middlewood, Sheffield (UK)

42. Rattlesnake and Dagger by Frank Carter (of Gallows, Rattlesnakes) at his studio Rose of Mercy in London

41. Finished work on my dragon w/ roses tattoo by Andy Northup at All Star Tattoos in St. Louis, Missouri!

40. Skull and Crossbones with Snake and Fire Done at Lilium Tattoo, HI

30. Finally added to the leg sleeve. Done in Watford, england

28. the auryn symbol from the neverending story (with a twist!) by the amazing christen wolfe in tacoma, WA… i got it over a month ago and i’m still in love with it

25. My largest piece yet, done in two 7h sessions. By Sinsay @ Glorious Art in Cologne, Germany

22. Eve and the Snake done by Marie Sena at Electric Eye in Dallas TX

21. Snake and Moon by Jared Booth at Blind Tiger in Phoenix, AZ

20. Mint snake designed by my friend and Jeff at West Town Tattoos in Chicago, IL

19. My dad and I, tattooed in Israel by Ido Botbul

17. Snake and Flowers by Rowan Starr at Central Tattoo Studio in Philadelphia

16. Snake and flowers tat by Richard Richardson at Hepcat Tattoo in Glasgow. highly recommend richard and all the guys at hepcat!!

14. Snake and flowers tat by Richard Richardson at Hepcat Tattoo in Glasgow. highly recommend richard and all the guys at hepcat!!

09. Floral snake on my head by Jessie Rose at Electric Panther in Little Rock, Arkansas

08. Techno Snake and the All-Seeing Hand, done by Sewp at Delete After Death Tattoo in Toronto, Canada

01. Lotus smoke blooms and Dragon, by Iris at Sinners Tattoo Studio in Dallas